The PAT was created under the provisions of the Academies Act 2010, as amended by the Education Act 2011. Its structure of governance is constituted under the Articles of Association. The Trust is an exempt charity by virtue of the Charities Act 2011.

The Funding Agreement between the Department for Education (DfE) and the Trust sets out the terms and conditions on which grant is made. The Trust Board is responsible for ensuring that the conditions of grant are met. As part of this process the Trust is required to have in place appropriate arrangements for sound governance, financial management, securing value for money and accounting, and for using public funds for the purposes for which they were intended by Parliament. 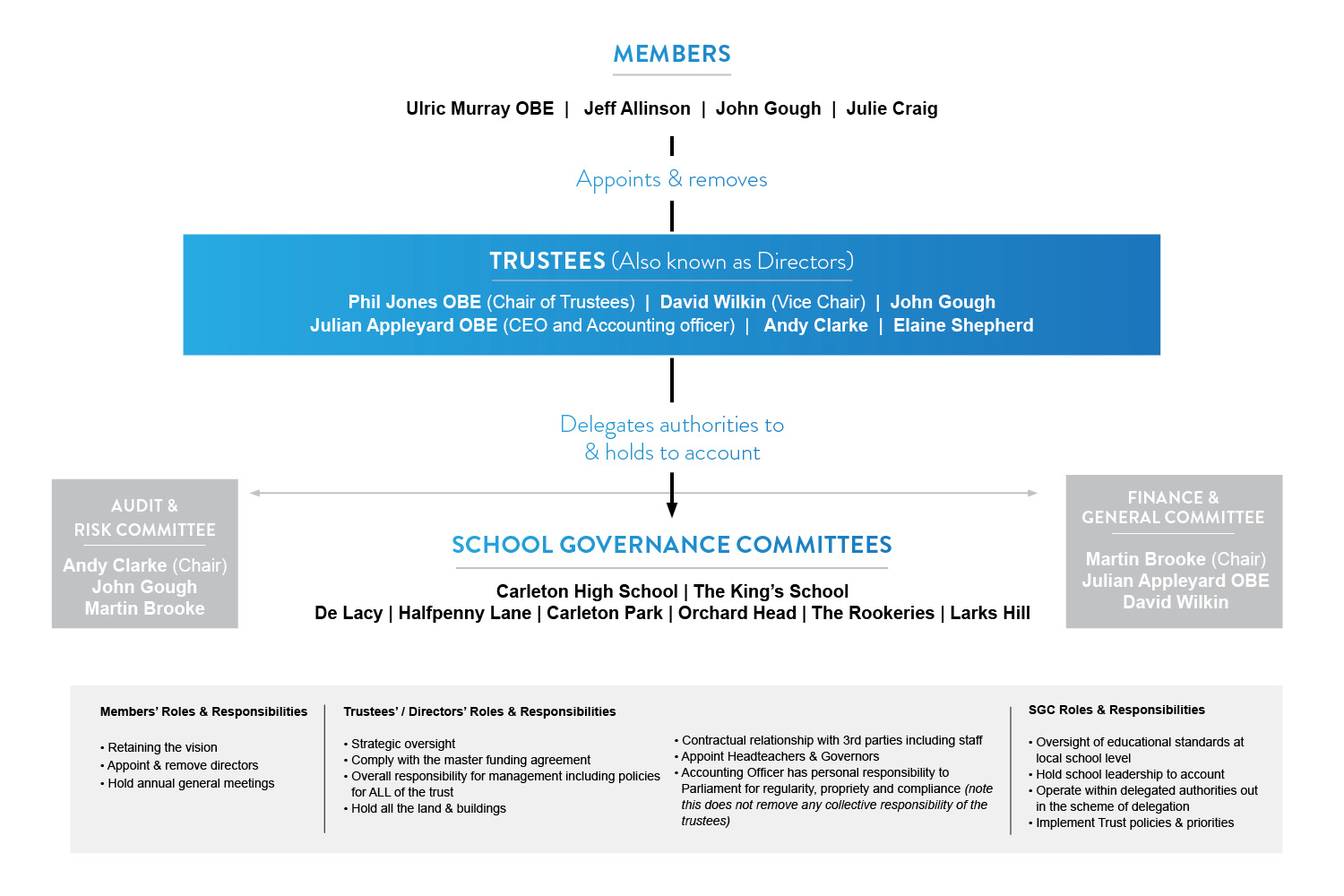 The Carleton Park Primary School SGC is a sub-committee of the Trust Board and has various responsibilities delegated to it through the Pontefract Academies Trust Governance Policy and Scheme of Delegation.

The School Governance Committee of Carleton Park Primary School is currently made up of:

Our Chair of Governors can be contacted at:

Mr Joe Ayre (Head of School)
Coming soon
Mr David Leigh (Community Governor)
I’m a geologist by profession and we moved to Pontefract in 1978 when I joined the National Coal Board, based at Allerton Bywater. Carleton Park has always been close to my heart. My four children all attended this school between 1988 and 2003, and I became a parent governor in 1989. I have been on the full Governing Body ever since, including a spell as Chair of Governors. My aim as a Governor was to give something back to the school in return for the outstanding start it gave my children both educationally and socially; and I regard it a privilege to have been able to help with fundraising and school functions, particularly the outings and residential visits with the children. Carleton Park continues to thrive as a school under Mrs Rowett and her team and they deserve to get the best possible support from the Governing Body – our aim is to ensure that they get just that.
Mr Nathan Loynes (Parent Governor)
I’ve lived in the same house on Carleton Park estate since I was four years old. I’m extremely proud to come from Pontefract. I’m proud of its history and its community spirit. I have a strong commitment to fairness and social justice, and this is reflected in my career experience and skills in local children’s services as a social worker. Learning is also close to my heart; for the last ten years I’ve been a university lecturer. Alongside full time working, I’ve continued to study and gain qualifications in my own time. Primary education is vitally important for children: done well, it’s a golden opportunity to inspire children to find out more about their 21st century world, and be the lifelong learners they need to be to succeed in it.
Mrs Ruth Simmons (Parent Governor)
I’ve spent most of my life in Pontefract, starting my own education at Carleton Park J&I school. It’s a privilege to be able to get more involved as a Governor in a school where I started myself and which all three of my children attend. I work as a local general practitioner and have my own practice. Within our practice I’m greatly involved in safeguarding, palliative care and family planning. To me, primary school is the start of a journey supporting children to aspire to have hopes and dreams in life. It is in primary schools that these foundations are formed and supported. I’m pleased to be part of supporting Carleton Park and Mrs Rowett’s team. In my past year as a Governor it has been a pleasure to see the school develop – the results, attitudes and behaviours are a credit to the staff at Carleton Park.